Morgan is the first drummer using the new DrumIt 5 MK2 live on tour! He’s testing it to the core on his live shows.
He’s appreciating the possibillty to trigger your own sounds, the sound quality of his DrumIt3 MK2, it’s great dynamics and that it is actually fast enough for his songs.

Morgan with his DI5 MK2 from his tour with Devin Townsend. 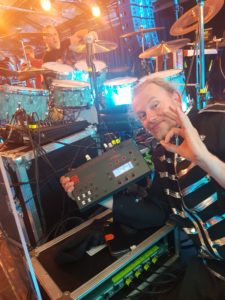